I am running a company and I think 90 percent of advice is garbage. But, I like talking to people about what they think. This is a visceral, comedic and therapeutic exercise on building a #NoCode business...from one founder's POV.
⚡Hosted by Jeremy Redman ⚡
“Hard to be boring around Jeremy Redman….he is the one of the hardest working and funniest founders I think I have ever spoken to :)” -Todd Uterstaedt, From Founder to CEO 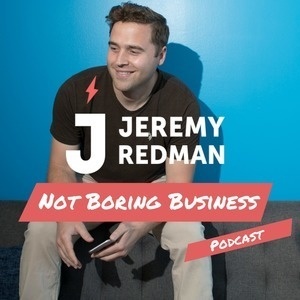 The business of pitching and selling your script with the "Greatest Hollywood Writer You've Never Heard Of", Ryan Tavlin.

Ryan has sat next to Hollywood execs and pitched his ideas, got them developed and got PAID to do it. That's why I call him the greatest Hollywood writer you've never heard of. That may change after you listen to this! Buckle in because Ryan gives you the blue print!

We also had an emailed question from Dave Fairman - check out Dave's short films at: http://lightintheatticfilms.com/